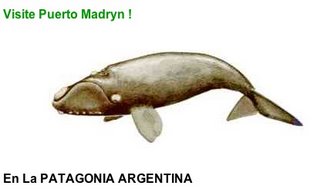 December 8, 1998: a date that will live in infamy. For on the day, at a small town on the coast of Argentina, my wife was the victim of a sneak attack by – a sea lion?

The town was Puerto Madryn, so named by its Welsh settlers a century ago. Located about 700 miles south of Buenos Aires, it is a small city of about 20,000 souls who scratch out a living on the edge of Patagonia. American visitors to Argentina are often surprised to find so many of the place names to be decidedly un-Latin. Madryn is one such name, and nearby Rawson and Trelew are others. The Welsh left their mark on Argentina’s history, as did the Scots, the Irish, and the Germans.

The main attraction of Puerto Madryn to cruise ships like ours, the Royal Princess, was not its Welsh heritage but its deep harbor and its fine long pier, saving ship and passengers the inconvenience of tendering. There are few sights to be seen in Puerto Madryn, and many tourists opt for a three-hour bus ride over bumpy dirt roads to a penguin preserve. We were not tempted by this – there would be penguins enough later in the cruise – so we decided to take the ship’s shuttle downtown, less than a mile away. The Royal had docked early that morning and would sail at 5 PM. Looking across the bay at the town, we thought that an hour’s visit would be about right, so we dawdled over breakfast and made our way down the gangplank at about 11.

The 45,000-ton Royal Princess was a grand sight as we walked alongside her at the pier. This was our third cruise on the ship, but it was still impressive, inside and out. We had boarded her in Buenos Aires after a few days in that magnificent city, called at Montevideo for a day, enjoyed an “at sea” day, and were now en route to Cape Horn and up the other side of the continent to Valparaiso, Chile. The prospect of “rounding the Horn” was exciting. On the Royal’s first, eastbound cruise of the season, the weather at the Cape was ferocious; in the words of one crewmember, it was “like being inside a washing machine.”

On the pier, just ahead of us, abeam of the Royal’s prow, a small group of passengers clustered around a huge lump of an animal, a sea lion. A very tame sea lion, we figured, to be sitting so placidly on the dock, not at all bothered by the human traffic. The situation seemed to cry out for a photograph, and indeed the other passengers were clicking away while the sea lion posed majestically.

The best photo, I reasoned, would feature, from foreground to background, the sea lion, my wife, and the ship. So, advancing forward of the bow, I prompted Jill to “Stand behind the sea lion.” Bad advice.

Jill likes animals, and she assumes that animals like her, so she advances to within a few feet of the rear of the sea lion. Then she rashly reaches out to pat the head of this 700-pound mass of brown blubber.

POW!! Sea lions look as if they are slow-moving creatures. They are not. It took this one less than a second to flick its head around and sink six big teeth into Jill’s right thigh. The pivot was counterclockwise, so the force knocked her away from the edge of the pier. A clockwise thrust would have sent her into the waters of Golfo Nuevo.

Gasps from the onlookers as Jill reeled, bleeding badly through her torn slacks. Husband rushes fearlessly to her aid and hails a crewmember to help her up the gangway and to the ship’s hospital. The sea lion, having delivered its message, resumes its pose for the shutterbugs.

In the hospital, a female doctor and a nurse assess the damage. Big holes in the thigh, but no apparent damage to bones or muscles. Has Jill had tetanus shots lately? Who knew? People should keep records of such things, but most people don’t. The medics assume no tetanus shots and proceed. The next question is more interesting: Can sea lions carry rabies? The doctor is “pretty sure” that the answer is no. The wounds are bandaged. Jill will survive.

The ship departs an hour late because of high winds, and then we head southeast, toward the Falkland Islands.

The next day and throughout the cruise, Jill is a celebrity, as passengers point her out to one another as “the woman who was attacked by the sea lion.” One passenger we befriend is a stunning blond girl, Mary, from New Orleans. Mary, it turns out, is a doctor, and she is aghast that we have settled for “pretty sure” in the matter of sea lions and rabies. “Rabies is one hundred percent fatal in humans,” she says, “and the doctor should be absolutely positive about this.”

Mary’s logic is impeccable, so, later that day, I raise the point with the ship’s doctor, who seems less than amused that her judgment has been questioned. She tells me that on cruises to Africa she has treated crocodile bites and hippopotamus bites. From a shelf she takes a big book with lists of animals that can and cannot carry rabies. Every animal in the world is listed – except sea lions. She will inquire.

The ship is carrying two ampoules of rabies serum – not enough for the full series, but more could presumably be requisitioned from the large British army hospital in the Falklands. But before another day has passed, she calls to report that she has phoned the Center for Infectious Diseases and a Marine Biology Laboratory in the U.S. Sea lions do not carry rabies.

It made sense. Rabies is carried by carnivores, and sea lions eat fish, plus an occasional nibble at a human who sneaks up on it from behind.

The Royal’s hospital staff provided first-class medical treatment throughout the voyage, the medications were on target, and the wounds proceeded to heal nicely. (“But you’ll never wear a bikini again, dearie,” clucked one lady at lunch. There’s one in every crowd.)

Fate had a hand in the episode. The Royal Princess was new to this itinerary, and this was its second cruise of the season. But on the first, eastbound cruise, bad weather at the Falklands forced it to bypass Puerto Madryn. So ours was this ship’s first call at the port – and its first encounter with the sea lion on the dock.

We never did see the sights of Puerto Madryn. Fellow passengers tell us we didn’t miss much, but all the same I wish we had seen it. They say that some of the restaurants serve high tea there and that Welsh is spoken by some of the inhabitants.

We have seen the wild life, however, and we will never forget it.
Posted by Fred Van Veen at 8:31 PM

I have been impressed by the advances made by the Koreans in the automobile market, and I know people who rave about their Hyundais and Kias. But now comes word that, henceforth every new Hyundai and Kia will come with satellite radio (XM or Sirius) installed. Sorry, guys, but that tears it for me. Forcing me to accept a subscription radio service (with Howard Stern, yet!) is a deal-breaker……… The recent “Great Performances” special on Beverly Sills was compelling TV. What a singer! What a woman!……… I have completed “The General Radio Story,” a history of a remarkable company, which created many of the instruments essential to the early development of electronics. The book is now available on lulu.com………… I can’t pretend to be a devotee of the ballet, but I did enjoy the DVD “Ballet Russe,” a two-hour documentary that traces the history of this legendary company, started in Paris in the early 30s by Russian émigrés. More than dance was involved, I learned. The ballet in its golden age was a blend of the best choreography (Balanchine), settings (Miro), music (Tchaikovsky), and costumes (Matisse) – a veritable banquet of fine arts. The DVD features relatively little dancing and relatively much reminiscing by the stars of yesterday, now mostly in their 80s and 90s – and in amazingly good shape!…...This is the time of the year when the world is divided into two parts: Those who think Christmas lights should be tastefully white, and those who prefer color. In the historic Massachusetts town where we used to live, white was right, and woe betide anyone who put a red or green candle in the window. I prefer color, and now that I live in laid-back Maine, I feel free to hang a string of color lights outside. The three stars in the windows are all white, however. There are limits.……………Did you know that, in 2005, fully 40 percent of all house sales in the U.S. were either for “investment” or vacation homes? And did you know that the average 7.1 percent sub prime ARM written in 2004 could reset to 11.4 percent in 2008? Scary…………As a sports fan, I marvel at the way professional football has become a national obsession. A ticket to a game at Patriots Stadium has become the kind of thing you leave in your will, and scalpers get insane prices for good seats. I marvel because I remember hustling hot dogs (see my earlier post, “The Hustler”) at Fenway Park during football games played by the Boston Yanks, the area’s pro football franchise in the forties. The Yanks were owned by Ted Collins, Kate Smith’s manager, and there were always plenty of empty seats, as the public was still unsure about pro football. What happened to convert the multitudes into sportsaholics? The answer is easy: Television. At first, team owners worried that fans would prefer free TV to paid admission, but once again conventional wisdom was wrong. The added exposure convinced the sports world that a pro football game was a Very Important Event, and attendance boomed……. Today I saw “The Queen,” with Helen Mirren. My high expectations were met and then some. Mirren deserves at least an Oscar nomination, if not the prize, and Michael Sheen, who is spot on as Tony Blair, merits a nomination, too. …….Three inches of snow fell here overnight. Snowfall in autumn ought to be illegal (as it was, if I remember correctly, in Camelot).
Posted by Fred Van Veen at 8:17 PM