Two extravaganzas lit up my LCD television in August. The first was the opening ceremony of the Beijing Olympics. That one left me breathless, and the most pitiable person in the world right now must surely be the director of the 2012 Olympics in London. One e-mail correspondent had it right: “London should just stage a performance of Hamlet and send everyone off to a pub.”

The second spectacle was Obama night at Mile High Stadium. The crowd was probably the largest ever to witness a convention address – roughly, I think, as many people as were jammed into the Birdcage in Beijing. My impression was that it was de trop, that no words, no matter how well delivered, could measure up to the setting. Barak Obama is a terrific orator, maybe the best of our time, but the Mile High speech was not a mile high. The talking points were too well orchestrated – as they will be this week in Minneapolis. Maybe I’m getting too cynical, but words designed to produce hysteria among the convention faithful sound too contrived on television. It is the same old recipe: something for the teachers, something for the old folks, something for the poor, something for the uninsured, and let us not forget the women and minorities and the armed forces. Noble causes have a way of sounding prepackaged at a political convention. It’s show biz, just as Beijing was show biz, but Beijing was more honest because it didn’t pretend to be anything else.

Now, what are we to say about Governor Sarah Palin? First, she is an attractive, personal, feisty woman and will be an energetic campaigner. There is not much else to say, except that it reveals much about the state of the Republican party that it could find no better qualified running mate, no one better prepared to place within a heartbeat of the presidency. Senator McCain is 72 and has had health problems. President Sarah Palin?

Yet I am still undecided. Senator Obama has obvious leadership talent, but I wonder about his program. For instance, if you increase the number of people covered by health insurance by, say, 20 percent without increasing the supply of doctors and nurses, won’t the system break down? Or take the Senator’s promise to penalize companies that ship jobs overseas and reward those who hire U.S. workers. How, exactly, will that work? If you ship electronic products to China and hire 100 Chinese technicians to service those products, is that a no-no? If you decide to staff a call center in Bangalore instead of Bangor, will President Obama attack you? There is more than a whiff of protectionism in the air, and this is worrisome.

McCain and Obama both come with major shortcomings, and I suspect many people will hold their noses as they enter the voting booths in November. One possibility that should not be overlooked is to vote for the candidate of one party while backing the congressional slate of the other.
Posted by Fred Van Veen at 5:16 PM

Georgia On My Mind

The dustup between the U.S and Russia over Georgia could not come at a worse time. In the final months of a presidential election, it is impossible to keep the candidates from sounding off on the subject, and there appear to be more votes to be harvested by “sounding tough.” So Senators McCain and Obama will both line up solidly behind Georgia and against Russia, no matter what the facts on the ground suggest. American voters instinctively back the little guy, even when the little guy may have ignited the conflict by tweaking the big guy. Also, the “hawk bloc,” which never saw a war it didn’t like, is licking its chops, venting, as usual, through the editorial pages of the Wall Street Journal. So we are headed for at least several months of rising tensions, with no one in the U.S. or Russia daring to appear soft.

No one in Washington wants to say it, but the days when the U.S. could call the shots everywhere on the globe are over. (Needless to say, Russia has even less clout.) Vietnam was the wake-up call, and Iraq sealed the deal. Our future lies in learning to get along with powerful countries we don’t particularly like. Bashing Russia over Georgia while simultaneously bashing China over Tibet makes no sense. “Demanding” that Russia respect the territorial integrity of Georgia sounds heroic, even noble – until one asks, “Like you respected the territorial integrity of Iraq?”

I am not trying to referee the situation in Georgia. It appears that Georgia’s President, believing he could count on Washington’s approval, decided to teach the South Ossetians a lesson, whereupon Russia decided to teach him a lesson. Maybe he miscalculated, maybe Putin overreacted (possibly borrowing Israel’s arithmetic in Palestine: you kill 10 of ours, we kill 100 of yours). But I don’t pretend to know for sure. That’s not my point. The point is, there are votes to be had – probably a majority – by sounding tough (vs Russia, vs China, vs anyone). A more nuanced position (“Let’s not blow this out of proportion. Let’s recognize that both Russia and Georgia have legitimate interests in the area”) is a sure recipe for defeat in November. Americans just aren’t ready for that.

With all our nuclear missiles, smart bombs, eyes in the skies, and armed drones, we haven’t been able to wipe out the bad guys in Iraq and Afghanistan, after five years.(Of course, the nukes don’t count, for good reason.) There are almost surely more people in that region who hate us than there were five years ago. If we bomb Iran, as many neocons urge, there will be still more. It’s a dispiriting prospect, but once the elections are over maybe common sense will break out.
Posted by Fred Van Veen at 11:39 AM

The Adman and the Cows 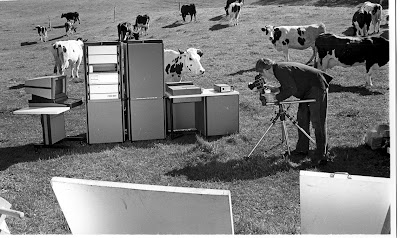 A long time ago, I was running advertising for my Company, a maker of semiconductor test systems. Other companies made similar systems, but our differentiator was reliability. Every one of our systems came with a 10-year warranty, which, when you think about it, was not that brave in a field where anything you bought would probably be obsolete in three or four years. Still, it was a brilliant marketing stroke, and enough systems were still chugging at age ten to prove the point.

But how to dramatize system longevity in an ad? Ads for electronic products were notoriously dull, featuring catalog photographs and lots of specifications (i.e. numbers). The bright, fresh ideas came from Madison Avenue (or from Rock Hudson, for the VIP account). The electronics industry would have no truck with that kind of hucksterism. But this time the ball was in my court, and I was determined not to be dull. So, at a fateful meeting of product managers, account executives, and sales management, I rolled out my undull Big Idea.

The tag line for the new series of ads and collateral would be “Till The Cows Come Home,” and the visuals would feature pictures of the new systems surrounded by cows. Applause. Adulation. One sourpuss pointed out that the cows in the picture might be thought to be coming home, which would ruin the whole idea, but he was shouted down. Most people thought it was devilishly clever.

The agency quickly lined up the site, about 30 miles south of Boston, and the schedule was set. I wrote the copy for the first ad. Space was booked in the leading trade magazines. I was on a high. I was bringing what one of my colleagues called “zonk” to our advertising.

Early on the appointed morning, we all showed up in the hired pasture. When I say “all” I mean “all” – truck with test system, a crew to set the system in the field, people (cowboys?) to manage the herd, photographers, and about a dozen others from the agency. And yours truly, to see that my Big Idea was handled right. The shoot went off without a hitch, and a few weeks later the ad campaign was launched. And then died a quick death.

The problem: “Till the Cows Come Home” sounded great in English. But it made no sense at all in Germany, as our German sales manager told me, rather indelicately. Lord knows how it sounded to Koreans or Japanese or Italians. Since a great deal of our business came from overseas, it was a monumental oversight on my part. It was no consolation to consider that the agency, product manager, and sales manager had also missed it.

We pulled the ads, but not until the first one ran. Somewhere in Bavaria, I imagine, a reader of a trade magazine looked at the headline in puzzlement and said, “was ist los mit den Kühen?”
Posted by Fred Van Veen at 9:20 AM