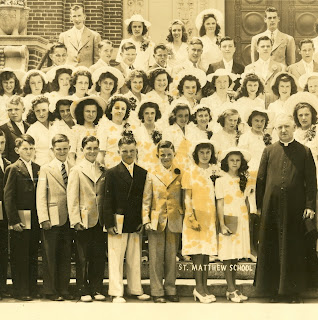 My early education came at the hands of the Sisters of St. Joseph who taught at St. Matthew’s School in Dorchester. The school itself was a three-story, yellow brick, Georgian Revival building at the right-hand end of a four-building lineup. Just to its left was the rectory, home to the pastor, Father Thomas R. Reynolds, and three curates. To the left of the rectory was the handsome Italian Renaissance church. Finally, to the extreme left, was the convent where all the sisters – our teachers – lived. It didn’t occur to us then that the church was strategically placed to separate the quarters of the priests and nuns, but it probably occurred to the designer of the entire complex, a Cambridge architect named Charles Greco. The church opened in 1926.

Ten years later, Father Thomas R. Reynolds was appointed the church’s fourth pastor. Father Reynolds (years later, he would become Monsignor Reynolds, presiding over Boston’s Cathedral of the Holy Cross) was an operator and a showman, in the best sense of those words. One example of his showmanship will make the point. Every Sunday afternoon in the winter, at 5, Benediction would be celebrated at the Church. For the finale of this service, Father Reynolds would lead the congregation in singing “Good Night, Sweet Jesus.” As the hymn neared its conclusion, banks of lights would be extinguished, one after another, until, at the last “Good night, good night,” only a spotlight would pierce the darkness, shining on the monstrance. The effect was stunning.

To supplement the collection plate, Father Reynolds concocted a year-round series of bridge and whist parties, dances, carnivals, and other events. There was no big money-maker, but taken together, it added up, and the funds kept the church and its clergy always looking well turned out. The church’s social calendar also added to a strong sense of community binding the parishioners to each other and to their parish.

In July and August, Father Reynolds brought us Summer School, a program no doubt meant to keep us youngsters out of the way of temptation. Each morning at 9, we would show up at the parish school for a few hours of religious instruction. Why would any sane boy or girl give up precious vacation time to do this? Because Father Reynolds provided a carrot: One day a week, after class, buses were lined up outside the school to take us on an outing. Among the destinations were Castle Island, an old fort guarding Boston Harbor, Nantasket beach, site of a wonderful amusement park, and Houghton’s Pond, in the Blue Hills Reservation in Canton. The parish curates would come along to see that none of us got lost or drowned.

The teachers were, of course, all nuns, and they were very strict. The principal was a Sister Dositheus, and the only other nun I remember by name was Sister Mary Cuthbert, who was a gem. They were all gems, actually, all giving their lives to the cause of drumming arithmetic, English, music, and history into minds that were usually preoccupied by other things, like Dick Tracy secret code rings and baseball games and, by the eighth grade, the party at Marie Burke’s house where the highlight would be a game of spin the bottle.

My photo of the graduating class of 1943 shows a total of 77 young men and women, all dressed up to the nines, the boys in jackets, white shirts, and ties, the girls in white dresses and wide-brimmed white hats. Half of this graduation photo is shown, with yours truly at the far left in the second row. Luigina, who is immortalized in “The Coddy,” is in the third row, fifth from the left. Father Reynolds stands proudly in front of his brood.

In recent decades, the neighborhood around St. Matthew’s became a high-crime area, and the parishioners who had supported the church and the school moved away, leaving a dwindling supply of Catholic families. The supply of priests and nuns also dwindled, and the once-proud St. Matthews’s complex, with its beautiful neo-Georgian and Italian Renaissance buildings, fell victim to the changing times. The school closed in 2006, its 175 students transferred to St. Gregory’s School, a few miles away.

My memories of St. Matthew’s School are all glowing, and if that school could be cloned today, education would take a giant leap forward. Of course, it would be a hard sell to today’s parents and teachers: no “special ed”, 40 pupils to a class, a strict dress code, and no transportation other than your two feet.

There was one other thing the school didn’t have: tuition. There were no teachers’ salaries. The Sisters of St. Joseph were all in it for nothing more than their room, board, and some sanctifying grace. Their pupils owe them a debt beyond description.
Posted by Fred Van Veen at 7:28 PM