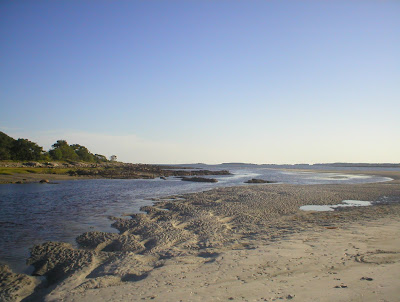 The summer is almost gone now. The sun's arc is a little lower, and a few formations of geese are winging south, ahead of the crowd. The beach isn’t as crowded, possibly because the temperature has been in the 60s lately. But the cool weather heralds what are in fact the most beautiful months of all in Maine, glorious September and October, when the sky is a bright, clear blue, and reds and yellows light up the maples and the birches. Tonight the weatherman is talking about frost warnings; the gardening season is short in Maine.

“Oh it’s a long, long while
From May to December
But the days grow short
When you reach September”

So wrote Maxwell Anderson in 1938, for a Kurt Weill melody. The song has been recorded by dozens of pop singers, from Frank Sinatra to Jimmy Durante, usually as a lament sung in the twilight of one’s life. I am old enough to appreciate the metaphor, but I am also hopeful enough to look forward to another spring.

Soon most of the people who live on the Point will pack up and head for lower latitudes. I used to look upon that as a sign of frailty; now I see that it’s a sign of sanity. So eventually I will join the snowbirds, but first there is that beautiful New England autumn to savor. The days may be dwindling down, but they are indeed precious.
Posted by Fred Van Veen at 5:36 PM