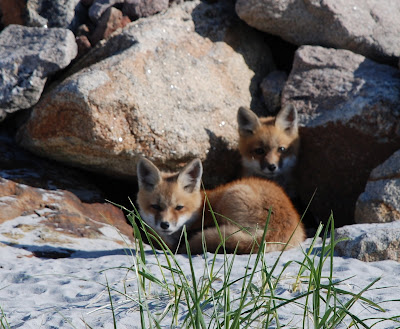 For the past few years a section of Goose Rocks Beach, where I live, has been roped off as a preserve for piping plovers, small birds whose population has dwindled down to numbers that have set off extinction alarms among preservationists. The ropes have been accompanied by stern signs warning people (and any of their pets that can read) to stay away from the birds. Thus we and the plovers have settled into an uneasy truce: You stay on your side of the ropes, we’ll stay on our side, and we’ll all get along.

This year the truce was broken. The birds’ advocates, seeing that the plover count continues to wane, declared war on animals they deemed predators. Raccoons, foxes, and skunks were among those targeted. We have to act quickly, said a fish and wildlife biologist, because “once a predation act occurs, it is too late.” The overseers of the nearby Rachel Carson Wildlife Preserve, having declared raccoons, foxes, and skunks an Axis of Predation, were stymied by their lack of weaponry, so they subcontracted the job to the U.S. Department of Agriculture, and soon a USDA truck was seen roaming Goose Rocks, loaded with traps. “What happens to the animals you trap?” asked one local. The USDA hired gun answered that they “euthanize” them. He also acknowledged that they sometimes shoot them.

The story was front-page news in the local paper, and Plovergate was born. Many Goose Rocks residents were outraged that their tax dollars were being used to kill animals whose only sin was trying to feed their young. I was one of the outraged. A few weeks ago a family of foxes took up residence in sand dunes near my house. Papa fox, mama fox, and three tiny kits. Foxes lived in the same foxhole last year, and my children and grandchildren loved to watch them. (The photo above was taken by one of my daughters.) We looked forward to having the new family as neighbors this year. But then, one night a week or two ago, a volley of shots rang out, and the foxes haven’t been seen since.

The piping plover, as even its supporters admit, is not a genius among birds, and it is easy prey for all manner of predators that roam this area. In time the bird will probably become extinct, a prospect that appalls the fish and wildlife folks. But species do become extinct, because that is the way things are in nature. If the fish and wildlife crowd wants to prolong the plovers’ existence, then they should build a plover preserve (Ploverville?) somewhere far away from humans, their pets, and all the other animals that somehow get along without Government assistance.
Posted by Fred Van Veen at 12:08 PM

A Tale of Two Pension Funds

New York State’s pension fund manages $122 billion, which, in the world’s center of creative financing, offers lots of opportunities for wheeling and dealing. According to the New York Times, this pension fund, controlled not by a board or a committee but by a single individual, awarded some of that pension money to an investment firm known as Quadrangle Group, which then arranged to help finance a low-budget movie called “Chooch.”

The trail is just now starting to unwind, and various threads of the story involve the State Comptroller, a former comptroller, the Chairman of the State’s Liberal Party, and the man who now heads the President’s automobile industry task force. Most of these people have not been charged with anything more than bad judgment, but the point is: How in the world did even a dollar of the New York State pension money wind up financing a movie named “Chooch”?


Now let’s cross the pond to the Netherlands. There we find a huge pension fund called ABP making another investment in the entertainment business. For an undisclosed price (rumored to be less than $200 million), the Dutch pensioners acquired the Rodgers and Hammerstein Organization, which gives them licensing rights to Oklahoma, South Pacific, Carousel, The Sound of Music, The King and I, and the rest of the R&H canon. But that’s not all. The Rodgers and Hammerstein Organization also controls the rights to 100 musicals, including those written by Irving Berlin, Rodgers and Hart, and Jerome Kern, 500 concert works, and 12,000 songs. So, with a stroke of the pen and the writing of a check that seems very modest, the Dutch pension fund has walked off with much of the American songbook, arguably one of this country’s most valuable artistic treasures. They also acquired the Rodgers and Hammerstein Organization itself, one of the world’s leading entertainment powerhouses. Give them credit; the Netherlands pension fund was very canny indeed, and, since the music they own is as close to immortal as you can get, its clients will reap the benefits of that investment long after we are all dead and gone.

And New York, the place where all that music was born? Its pensioners got a movie called “Chooch.”
Posted by Fred Van Veen at 4:32 PM