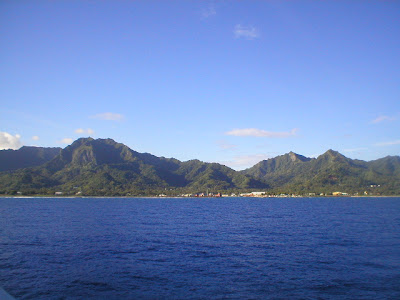 After sailing 1000 miles to reach Tabuaeran Island, we had even farther to go, 1500 miles, to reach our next island: Rarotonga. Rarotonga is in the Cook Islands and is one of a 15-island archipelago tightly linked to New Zealand (though it is an independent country). The village you see in the photo is Avarua, the capital of Rarotonga.

We did not anchor off Rarotonga; we drifted, as did another cruise ship nearby, the Seabourn Odyssey. At the point where I took the picture, the sea was 6000 feet deep, so anchors were impractical. The sea was more turbulent that it looks, so passengers were advised to tender ashore only if they were ready for a rough ride. Still lame from my experience at Tabuaeran, I decided to forego the pleasures of Rarotonga – a decision that I now regret.

Just off the right-hand edge of the photo is the small Rarotonga airport. While perched on the Promenade Deck, I noted a couple of propjets taking off and figured they were ferrying people to nearby islands. That conclusion was probably correct, but I greatly underestimated the distances within reach of the island. Twice a week an Air New Zealand 777 checks in to Rarotonga en route from Los Angeles to Aukland. Why? The population of the island is only 14,000, much greater than most of the other islands we would visit, but still, fewer people than live in Biddeford. The answer probably lies in the posh resort hotels that New Zealanders and Australians patronize.

At some point, I may catch up to Rarotonga. It looks like a fine place to spend some time when the snow sweeps down on Maine.
Posted by Fred Van Veen at 2:33 PM 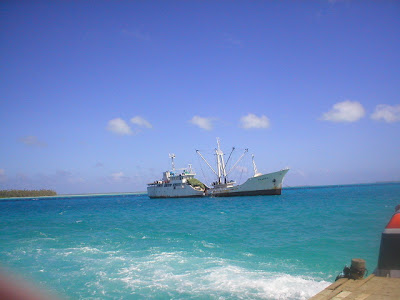 Tabuaeran is a low-lying atoll on the equator, rarely visited by tourists. It belongs to the country of Kiribati (pronounced Kiribas), which is a scattering of about 30 islands in three widely separated groups in the mid-Pacific. Tubuaeran is in the easternmost group, the Line Islands, and is separated from its country’s capital. Tarawa, by 2000 miles, which is a long drink of water. There is no airstrip on Tabuaeran, and the supply ship, the Moamoa (a creaky-looking affair which was present when we visited and is shown above) calls three or four times a year. Tabuaeran is, in other words, a very lonely, very isolated place.

We arrived at Tabuaeran after a 1000-mile voyage south from Hilo, Hawaii and tendered to shore. We were advised about Tabuaeran’s isolation and poverty and the island’s needs, especially school supplies for the children. So many passengers brought ashore bags of notebooks, pencils, sharpeners, pens, and the like, much of it purchased at stores in Hawaii. The many children of Tabuaeran looked on with delight as the passengers came ashore. 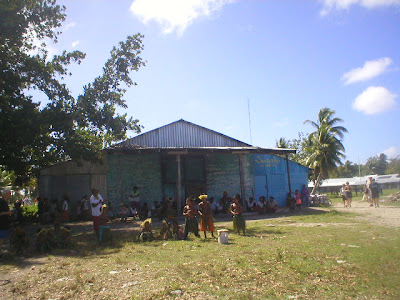 Passengers were also warned not to expect any conveniences like drinking water, toilets, etc. on the island, and some opted to admire the island from the decks of the Rotterdam. But I was determined not to miss the most primitive place we would see on our voyage and hopped on a tender. On the return passage, “hopped” is the right word; the tender lifted as I began my jump from tender to platform, and the result was a leg strain that hobbled me for the rest of the cruise. Still, the close-up look at Tabuaeran was worth it.

Tabuaeran is also called Fanning Island, after an American sea captain who visited it in 1798. Its country, Kiribati, was given its independence from Great Britain in 1979 and is a full member of the UN and the IMF. It is a curious country, spread as it is over 1.35 million square miles of ocean (an area bigger than India!). The good folks who live on Tabuaeran had better hope that the Moamoa is more reliable than it looks.
Posted by Fred Van Veen at 11:47 AM 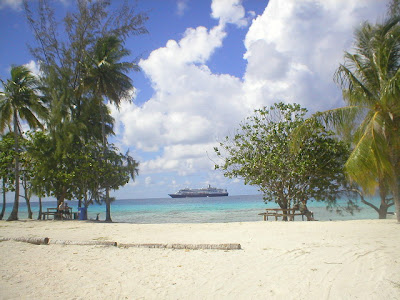 Rangiroa is an atoll in the Tuamotu Islands in the South Pacific. It is one of the largest atolls in the world, which may not mean much until you understand just what an atoll is.

An atoll is a coral island typically shaped like a necklace. Rangiroa's lagoon – the water enclosed by the necklace – occupies 630 square miles, although the area of the necklace itself is only 15 square miles! So if you’re on one side of that skinny necklace it is not possible to see the rest of the island; the lagoon is too big.

The Rotterdam anchored just inside the lagoon (there are hundreds of breaks in the necklace) and we tendered in to a village called Avatoru. The scenery was a Hollywood South Sea Island set, complete with beautiful beaches, palm trees, Polynesian men pounding drums, and pretty Polynesian girls selling black-pearl necklaces. I sashayed over to a pair of teenagers and asked them how many people lived on Rangiroa. The puzzled looks told me I was speaking in the wrong language. So I tried French, which worked. The girls huddled, first to agree on the answer to my question, then to figure out how to communicate it to me. Then one girl whipped out a calculator, typed some numbers, then showed it to me: 2000. The new universal language is digits.

Some brave tourists plunged into the water and swam; others, I among them, strolled along the dirt road that led to the other side of Paradise.

There are hotels on Rangiroa, and even an airport, so one can fly the 365 miles from Tahiti. But Rangiroa is not Palm Beach, and anyone venturing to Rangiroa should bring along a few good books to read.

And the scenery is beautiful, but unvaried. An atoll is an atoll, after all, and there are no mountains to climb or valleys to explore. But for a beachcomber, it’s as good as it gets
Posted by Fred Van Veen at 8:55 AM

The Pacific Ocean is big. I mean VERY big. I have just wandered through 10,000 miles of it, and I didn’t begin to scratch its surface. I did see enough of it to pass along some observations, though, which I'll relate in this and future blogs.

The voyage began in San Diego and headed west, toward Hawaii. Then, after calling at three of the Hawaiian Islands, it headed south, to Tabuaeran (or, if you’re a Westerner, Fanning Island) in the country of Kiribati. Then another 1500 miles south, to Rarotonga, in the Cook Islands, an independent country that shares a currency and a history with New Zealand. Then a tour of the Society Islands (Raiatea, Bora Bora, Moorea, Tahiti), then a stop at Rangiroa atoll in the Tuamotos, then to my favorite place, Nuku Hiva, in the Marquesas Islands. From Nuku Hiva it was a mere 3200 miles back to San Diego.

The immensity of the Pacific: In 30 days of sailing, we saw nary a single ship. (A few cruise ships were in ports with us.) As befits a voyage in the Pacific, the seas were for the most part calm, the weather sensational.

I had been to Tahiti and its neighbors before, so those islands held no surprises for me. But let me tell you about Nuku Hiva. The Marquesas, 10 islands of which six are inhabited, are the peaks of submerged volcanoes, so they are dramatically mountainous and fertile. Spanish explorers discovered them in 1595, and in the next centuries the white men came, bringing gifts like syphilis, smallpox, measles, malaria, and TB – and nearly wiping out the native population of Polynesians. 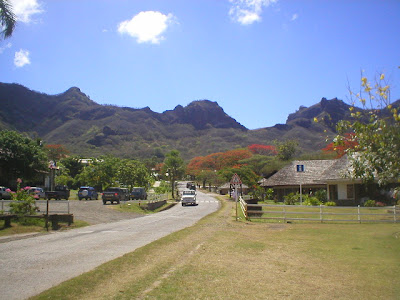 The village on Nuku Hiva we tendered to is Taiohae, a trim little place that sees a cruise ship only a few times a year. Taiohae has a Town Hall, a bank, a few markets, and the impressive Notre Dame Cathedral. The main road, fringed with flame trees, hugs the bay where the ship was anchored, and it is in surprisingly good shape (no ice or snow, of course). The people are friendly and helpful – just as Robert Louis Stevenson, Herman Melville, Paul Gauguin, and Captain Cook found them. They owe their allegiance to France, speak the French language, and use the French Polynesian franc as currency. As I found out when I was looking for a ride back from the Cathedral to the tender pier, there is no local transportation available. With an island population of 2700, why would there be?

We were on Nuku Hiva for only a day; then it was back to the sea, for the six-day voyage to San Diego. I will tell you more about Tabuaeran and some of the other ports of call, but Nuku Hiva earns a special place in the story.
Posted by Fred Van Veen at 9:21 AM