Give President Obama credit. In tackling health-care reform, he is opening a can of worms that he doesn’t need. With Afghanistan going badly, with the economy on life support, with political sniping from all sides, why stir up the health-care hornets’ nest?

On the other hand, maybe his crusade isn’t as courageous as it seems. Although he claims that we can pay for reform mostly by eliminating waste, he refuses to touch one of the biggest waste-makers of all: defensive medicine undertaken to avoid lawsuits. This deference to the power of the lawyers’ lobby can’t be explained by anything other than political expediency. It smells bad.

The waste argument is flimsy on other counts. It is said that the insurance system creates an incentive for needless tests, and that is undoubtedly true - in hindsight. But if you have a medical problem and the doctor prescribes four tests, and two are said to be unnecessary, how does the doctor know – in advance – which two are valid? By studying outcomes, they say. So your doctor suggests four tests, runs them by a computer, and tells you that you qualify for only two of them. There. You feel a whole lot better, don’t you?

A modern jetliner has two sets of avionics. One set is almost never used. Yet we pay for the redundancy – the inefficiency – because human lives are at stake. So it is with the health-care system. You want it to be efficient, but if it’s your life we’re talking about, you want all the tests your doctor thinks you need. Period.

The health-care debate boils down to a couple of issues. First, most people in the U.S. are satisfied with the health care they receive. They are being asked to pay for the addition of 30 or 40 million people to a government-run insurance system. Because we are a generous nation, we think it’s a good idea – if the quality of our own health care doesn’t suffer in the process. There’s the rub. The idea that my primary-care physician can increase his patient load by 15 percent by working more efficiently is nonsense. He already works hard and makes full use of his computer. And we can’t magically increase the number of medical professionals by 15 percent. The math is inescapable: Universal health care will mean longer waits to see one’s doctor. Maybe we are willing to tolerate the inconvenience in order to do the right thing. Maybe we’re not. No one is raising the question.

The strongest case for health reform is the financial case. Medicare and Medicaid are in big trouble, and something must be done. Delaying retirement till 67 or 68 makes sense, given increasing longevity (itself an argument for the quality of our health care). Reducing the incidence of malpractice suits makes sense, too. And yes, there is some waste, though almost certainly not as much as the President claims. The financial argument is bulletproof, but it applies only to Medicare and Medicaid. There is no financial case for universal health care, only the moral case. And that, given the state of today’s economy, is a hard sell. So the President is trying to package it as a financial imperative, and that’s disingenuous or dishonest, depending on your politics
Posted by Fred Van Veen at 10:54 AM

The Rain in Maine

The rain started in early June and stopped a few days ago. At least that’s how it seems. And it has been much colder than normal, with temperatures touching 80 only a few times, even though we’re through most of July. The water table is high, and the Saco River looks like the Mississippi. The sump pumps are working overtime to keep cellars dry, and for some cellars it’s a losing battle.

Maine’s economy depends – far too much, I fear - on tourism, and the tourists don’t like rain. A smarter state would work hard to attract manufacturing, but Maine people are ambivalent about manufacturing, especially when it means big plants owned by big companies. We are all for small business, so that’s the only kind we have. We have thousands of small businesses catering to tourists. If a big company threatens to build a plant that might employ two or three thousand workers, there will be a referendum, a mighty battle between good and evil. A greedy out-of-state company presumes to come into our beloved state and upset all that we hold dear. Yes, there will be jobs, but there will also be more traffic, more crime, and the first thing you know we will be on the road to – I say, on the road to depravation. Our River City is Augusta.

That’s the way it is in Maine, which is almost defiantly proud of its poverty. The politicians will tell you that we are disadvantaged by geography, being at the end of the distribution chain. That might have been true a century ago, but in the age of the internet, no one is at the end because there is no end. No, Maine’s economic distress is self-inflicted. We have high taxes, a business-unfriendly legislature, and an apathetic electorate. Our brightest graduates emigrate because they are bright enough to know the score.

The people up north, in “the County” (Aroostook) know the score, too, but there aren’t enough of them. So their attempts to develop some of their abundant land are stymied by the passionate preservationists in Portland, who may never visit the north woods but say they want to save them “for our children and grandchildren.” But their children and grandchildren will be living in Austin or Atlanta, because there weren’t enough good jobs in Maine.

Maine is a beautiful state, and I am very happy to live here (except in winter). And I would not like our coastline to resemble the stretch around Fort Lauderdale or Miami. So I tip my hat to past preservationists who kept growth rational. But things are tough right now, and it is time to put out the welcome mat. Small business is nice, but big business – the kind that can hire people by the thousands – is better. The only kind of small business worth having is one that aspires to be a big business. What would Maine be like today if Bob Noyce or Steve Jobs or Bill Gates had decided to pitch his tent in Portland? It would be different, and to many Mainers it would be worse. But they are wrong. It would be better, with or without all that rain.
Posted by Fred Van Veen at 8:50 PM

I know that you never had any use for e-mail, because you thought that only paper and ink constituted a real letter (and you wrote at least one letter a day to someone or other, it seemed), but I don’t know the zip code for Heaven, so I’ll have to communicate through cyberspace.

The weather at the beach has been abominable – a soggy summer following a dreary spring following a beastly winter. They say that in June we had a period in which it rained 23 out of 27 days, but I don’t remember even four rainless days. On the fourth of July, a Saturday, the beach population was the smallest I’ve ever seen on that holiday. The merchants are ready to commit mass suicide.

Our children and their children have been here every weekend. One weekend there were nine of them, which is one more than the place sleeps, but we managed. And they leave the house in immaculate condition, because you taught them the importance of keeping the guest rooms tidy, since they are the first thing a visitor sees, the “windows on the house” you called them.

That’s not all you taught them. As a matter of fact, you taught us all the entire book of virtues. You left us a moral compass, and whenever we come across a dilemma, we know a simple way forward: WWJD. What would Jill do?

Cathy still comes every month to give the house a top-to-bottom cleaning. The new upper deck is complete, the lower decks have been painted, a new post-and-rail fence has been ordered, the gardens have been weeded. You’d be proud.

Food. Well, I still can’t cook at all, but I am not starving. The neighbors have been kind (what’s that line about “depending on the kindness of strangers”?), the TV dinners aren’t bad, and once in a while I rustle up franks and beans or spaghetti. The freezer has been emptied of all the old food and defrosted. I really don’t need a freezer, any more than I need the new car I bought while you were in the hospital. That was to have been your car, but now this house has more cars than people. In fact, it has more of everything than people, and if this were the Russia of Dr. Zhivago, some commissar would force me to share the space with the masses.

I went with Lucy and her gang to see a play at the Grange Hall the other night. It was essentially a solo performance, based on the music of Patsy Cline, and it was excellent. You’d have loved it, because the lead’s voice was good and the notes were all true.

You still get a lot of mail. Magazines like Real Simple, solicitations from politicians, surveys (which are really solicitations), catalogs, etc. In fact, you get more mail than I do, which is pretty funny when you think about it. I throw most of it in the trash unopened.

Your desk and sewing machine and all those bobbins and spools and yarn are as they were when you left. They will probably stay that way for a long time. The same goes for your pictures on the walls and the knick-knacks on the shelves and all those crossword-puzzle books. I don’t dare touch any of it, because I know you are watching.

The days pass quickly – and silently, when I am alone. I talk to you often, out of habit and because, well, just because.

It’s time to turn in now. I think of you all the time, and I wish you were here. 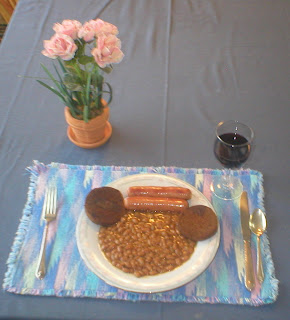 Here’s a great recipe for all you food fans. You might think I don’t know much about cooking, seeing as I’ve been at it for only a few weeks, but I have always been a quick study. Anyhow, the results are what count, and this is really a meal fit for a king.

Here’s what you do: First, get a pot and put it on the stove. I use a small green pot with a black inside. Then you open a can of baked beans. I use the smallest size can, since I want only one serving, and if I opened a large can the unused beans would be a problem. I use Bush beans, because I like the design on the can.

Then you take two Kayem frankfurters out of a package you’ll find in the freezer. The package will have six or eight frankfurters in it, and if it’s been in the freezer a while, you may find that they’re all stuck together. If a knife won’t pry them apart, I find that a chisel and hammer work fine.

Find a small frying pan and put it on the stove. Then put a piece of butter in the pan so that it will melt when it heats. Then put two frankfurters in the pan. As you see, this is a fairly simple recipe, which I personally prefer.

After another 5 or 10 minutes, you will have a delicious dinner. Garnish to taste, with ketchup, mustard, and relish. A good cabernet sauvignon will complement this entrée nicely.