The imminent opening of a film version of Brideshead Revisited has triggered a spate of commentary, both prospective and retrospective, on attempts to film Evelyn Waugh’s classic novel. The best so far has been Ginia Bellafante’s piece in today’s New York Times, as nifty a bit of writing as you’ll see in a daily newspaper.

The gold standard, of course, is the 1981 television miniseries, which in the opinion of many (including me) is the finest dramatic endeavor ever produced on film or videotape. The casting was just about perfect, with stage legends Laurence Olivier and Claire Bloom as Lord and Lady Marchmain and John Gielgud as Edward Ryder. The central role of Charles Ryder launched Jeremy Irons’s career, and supporting actors Phoebe Nicholls and Simon Jones had the roles of their lives as Cordelia and Brideshead Flyte. The weak link, in my view, was Diana Quick as Julia, but this can be overlooked in an assessment of what is, by any measure, a dazzling entertainment.

The producers of the new, filmed version, were forced to telescope a 21-hour miniseries into a 2-1/4-hour movie, and, judging from the initial reviews, they took considerable liberties with Waugh’s plot in order to do so. (For the TV production, scenarist John Mortimer was heroically faithful to the book, so much so that when I reread the novel the words and scenes sprang to life from the printed page.) Waugh addicts are likely to be infuriated at this, but I will reserve judgment until I see it – if an art film like this ever makes it to the nabes in Maine.

The renewed interest in Waugh’s work prompted me to watch the 1987 British TV production of Scoop, one of two Waugh novels dealing with the confused (to be charitable) state of African politics. Of course, Waugh’s real target is the British upper class, as personified by the people who run The Beast, a London newspaper. William Boot writes a sedate column for The Beast dealing with the crested grebe and its like. Through a mixup he is sent by his newspaper to cover an incipient war in a woebegone African country called Ishmaelia. To tell you more would be pointless (and difficult), but I can say that the sterling cast (Michael Hordern, Donald Pleasance, Denholm Elliott, and Michael Maloney as Boot) gives the film all the absurdity that Waugh could have wanted. Waugh traveled extensively in Africa, and his other novel set in that continent, Black Mischief, is even better in my opinion, but it has never been filmed. (Apparently not even the bravest producer dared tackle a novel whose heroine is eaten at the end.)

A Handful of Dust helped establish Waugh as a gifted writer in 1934, and in 1988 it was turned into an excellent movie. How could it fail, with Alec Guinness, Kristin Scott Thomas, Judi Dench, Stephen Fry, and a terrific James Wilby in the cast? The director, Charles Sturridge, was the same man who had steered the Brideshead miniseries seven years earlier, and he is co-credited with the writing.

Waugh’s trip to Hollywood resulted in a film version of The Loved One, a freakish movie featuring, if you can believe it, the likes of Jonathan Winters, Milton Berle, Liberace, John Gielgud, and Robert Morley. Plus, disastrously, Robert Morse in the lead. It was a terrible movie. As a matter of fact, most of Waugh does not translate well to film, because so much of its value lies in the printed words. Those few who understand that, as John Mortimer did, can give us something for the ages.
Posted by Fred Van Veen at 10:16 AM 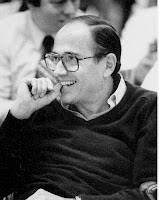 An old friend died yesterday, and his life was so exceptional that it deserves to be commemorated here. His name was Alex d’Arbeloff, and most people who have heard of him knew him as the cofounder and long-time CEO of Teradyne, Inc., a major manufacturer of semiconductor test systems. But that was only for openers. After retirement, he was the Chairman of MIT, a lecturer at its Sloan School, and an organizer and director of many high-tech companies. He was still going strong right to the end.

Alex was born 80 years ago in Paris of Russian émigré parents and wound up in New York in 1938, after the family spent a couple of years in South America. After high school in New York, Alex enrolled at MIT, and it was there he met Nick DeWolf, with whom he founded Teradyne in 1960. The pair launched Teradyne in a most unlikely location: not along Route 128, but in the heart of downtown Boston, and for the next three decades Teradyne’s three downtown buildings were a fixture in Boston, drawing visiting customers from all over the world and providing good jobs and benefits to thousands of workers who could commute to and from work via the “T.”

By the time Alex retired in 1997, Teradyne was a multibillion-dollar company and the leader in its field. The next time you marvel at the dependability of your TV or cell phone or the electronics in your car, you might tip your hat to the test technology, largely from Teradyne, that makes everything so bulletproof. There was more to Teradyne than semiconductor testing, because Alex’s appetite for innovation knew no bounds. There was a breakthrough test system, called 4TEL, for telephone lines. There was a connection company which grew to become a billion-dollar enterprise in its own right. Teradyne’s biggest successes grew out of in-house projects; he had little appetite for acquisitions – or, for that matter, most of the other games today’s CEOs play.

Alex succeeded so brilliantly on the strength of some qualities that are all too rare these days. First, he had an uncompromising sense of integrity. If someone violated Alex’s sense of right and wrong, he or she was gone in an instant. It happened rarely, because the hiring process was well filtered, but it happened. Second, Alex had an uncanny sense of recognizing true talent, attracting it, and retaining it. The team that Alex assembled in the early nineteen-seventies was essentially the team he built the Company around, and it was an incredible team, an all-star at every position. Third, he knew how to deal with people. A mutual friend, the CEO of another company says, “I never met anyone who was a better people person than Alex.” That’s because Alex respected people as human beings, and he never, ever belittled anyone. Fourth, he had a wonderful sense of humor. “Alex stories” are legion, and his own favorites were funny stories where the humor came at the expense of Alex himself. He would never make fun of others, but he loved it when people made fun of him.

It must be said that Alex was the consummate family man. His wife Brit and their four children were the inner circle, but the extended family also included his parents, Brit’s parents, his two brothers, and of course the growing d’Arbeloff clan. It was probably inevitable that the stroke that cut him down occurred at a family gathering last Saturday.

I was lucky enough to work closely with Alex for 27 years. They were unforgettable years, because he was an unforgettable man. We lost a giant yesterday.
Posted by Fred Van Veen at 2:11 PM