The British are the masters of the miniseries. The Americans may be the masters of musical theater and fast food, but when it comes to miniseries we aren’t even close. The Masterpiece Theater franchise alone gives them the cup, but then there are also the likes of Brideshead Revisited and Monarch of the Glen and Traffik and Ballykissangel and countless others. The British seem to have an unlimited supply of good writers (many of them long dead) and an unlimited supply of (live) leading men, leading women, and character actors, all of whom seem to have flawless diction and experience with the Royal Shakespeare Company or the Old Vic.

Every viewer seems to have his or her favorite in the miniseries treasure chest. One believes there will never be another Upstairs, Downstairs, another prefers Tinker,Tailor, while a third votes for Foyle’s War. My own favorites are all the aforementioned, plus one newcomer, whose praises I now wish to sing.

The series is called 2000 Acres of Sky, and if this produces a sea of blank stares it is not surprising. The series, produced in Scotland, has never made it across the Atlantic. Never, in any form. No DVD formatted for U.S. television, no Netflix, no PBS airing. That’s a crime, because this is one compelling drama, with intelligent writing and some of the most fascinating characters and plot turns you’ll ever see, all played against that awesome Hebridean scenery.

Here’s the situation that launches the series: On the fictional island of Ronansay (near Skye) the small community faces a crisis, as the school population has dropped to three – two fewer than the minimum required by the Scottish school authority. If the school closes, as seems likely, the three remaining students face a long ferry ride to and from Skye. Worse, their parents will probably leave the island, driving one more stake into the heart of the island as it fights for survival.

The solution, Ronansay’s people decide, lies in attracting a family with at least two children. What the island can offer the family is an abandoned B&B and help in making a livelihood on an island that is quite beautiful and attracts a fair number of tourists. So they run an ad in the British papers. 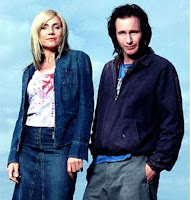 To Abby Wallace, a mother of two small children, living in noisy, crime-ridden East London, the ad’s prospect of a Better Life for her and her children seems irresistible. The catch: Abby’s husband abandoned her and her children years before. The ad says Ronansay is looking for a married couple with children, and Abby is a single Mom. But living down the corridor in the tenement is Kenny, a buddy of Abby’s – nothing more – whose ambition, to the extent he has any, is to be a rock star. Kenny will never make it, because he doesn’t have the talent, but he is a close enough pal (who loves to tell Abby’s children outrageous bedtime stories) so that Abby asks him to join her in answering the ad (and sending a staged photo of “the family”).

What happens if Ronansay chooses them from all the applicants? We can sort that out later, says Abby, implying that once the children are installed in the school, Kenny can safely return to London and his gigs.

The starting premise is obviously promising, and before long we meet and come to know the characters that make life on Ronansay miniseries-worthy. But it is the development of the character Kenny that makes this series so worth watching. Writer Timothy Prager (who wrote 21 out of the 22 episodes) transforms Kenny the born loser, with his freaky face and crucifix earring, into Kenny the magnetic centerpiece of the drama. Kenny, played to perfection by Paul Kaye, is forever wondering what his purpose in life is, and we wonder too, while we become captivated by his essential goodness. To tell you more would be unforgivable.

The series played in the U.K from 2001 through 2003, and it won its share of critical praise and awards. Its failure (so far) to find an American outlet may have something to do with those Scottish accents, though captions are available. (Monarch of the Glen was also filmed in Scotland, but most of its principal actors spoke BBC English.)

You could write a book about the cultural differences that assign most British miniseries to PBS, while commercial TV gives us The Sopranos and Desperate Housewives. De gustibus, non est disputandum.


P.S. You can buy Region 2 DVDs of this series from dealers in the UK, and you can play these on “multi-region” DVD players. (Ask at the store.)
Posted by Fred Van Veen at 6:42 PM

Before television (BT), you had to have talent to command the public’s attention. And you had to work for years to develop that talent. Comedians like Jack Benny, George Burns, and Bob Hope, singers like Rudy Vallee, Bing Crosby, and Jimmy Durante, dancers like Fred Astaire, Gene Kelly, and Eleanor Powell had to spend a long apprenticeship practicing their craft, sharpening their timing, learning how to play to an audience.

Then came television, and a new kind of “talent” appeared: For want of a better word, we’ll call it personality. People with no discernible talent in the traditional sense sought to make it by talking to an audience. In the earliest days of television, when the networks were desperate for something to fill time, there was a late-night show called “Broadway Open House,” with a comedian, sort of, named Jerry Lester. Steve Allen (who actually had talent), Dave Garroway, and Jack Paar followed, building a following, not by singing or dancing or playing an instrument, but by talking. Arthur Godfrey was cut from the same cloth, and of course Ed Sullivan was the embodiment of the no-talent star. He had less talent than your third-grade teacher or your plumber, but he became a sensation simply by attracting and introducing talented people like the Beatles.

Years before television, a talker named Will Rogers was immensely popular for his humor and, yes, personality. Rogers had a talent – rope-twirling – but that was beside the point, and he was the first to prove that one could parlay wit and political commentary into national fame and fortune. But Rogers was a one-off phenomenon in the BT era. All the others needed to be able to do something to achieve stardom.

Johnny Carson occupies a special category: the talented comedian who channels that talent into a late-night variety show, in which a singer or comedian or pianist performs, then sits and banters with the host. No one could do that like Carson.

Another special category is reserved for Oprah Winfrey. I shouldn’t even comment on Oprah, since hers is not a prime-time program, and since I haven’t watched her enough to comment intelligently. But if she has any performing talent I’m unaware of it. She obviously connects with her audience, as Arthur Godfrey connected with his audience.

That brings us to Jay Leno and David Letterman, each of whom has a skosh more talent than Ed Sullivan but not enough for you to notice. NBC has just moved Leno to the 10 PM slot to revolutionize evening television, they say, but in fact to save money. Talk is cheap. A talker like Leno costs a fraction of the money it takes to produce a drama, with all those actors, writers, cameramen, special effects, etc. No one really expects viewers’ habits to change much, except that more people may decide to see what’s on PBS or the cable channels at 10 o’clock. More likely, they’ll log onto the internet.

Letterman, once he finishes his opening monologue (that others write for him) is no Will Rogers. He is not even a Jack Paar and he is not remotely a Johnny Carson. He is in the news today for his admitted dalliance with female subordinates, but whatever credit he claimed for “fessing up” was wiped out when he used his embarrassment as the basis of a one-liner. No talent, no class.

But the fade-out of late-night talk was bound to happen, just as the decline of newspapers and magazines had to happen. A digital earthquake has hit the media world, and the aftershocks keep coming. I keep getting magazines even though my subscriptions expired long ago, and the publishers try to lure me back with $10 “special” subscription rates. I don’t bite.

When Leno and Letterman are gone (which, happily, may be soon), it would be nice if television rediscovered the value of talent. The kind of talent you used to see on The Bell Telephone Hour, Your Show of Shows, The Jackie Gleason Show, and The Carol Burnett Show. A show like any of those would cost money, but I’ll bet it would wipe out the prime-time competition. If I’m wrong – if most people would rather watch Jay Leno or “Reality TV” or American Idol, then our collective taste has sunk so far that it is beyond salvation.
Posted by Fred Van Veen at 9:02 PM