Twilight at the World of Tomorrow 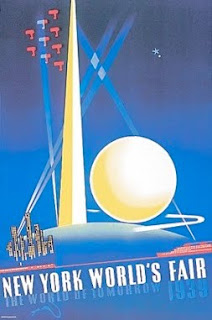 One day in 1934, Joseph Shadgen asked his 12-year-old daughter Jacqueline what she had learned in school that day.

“We learned that the United States is 158 years old this year.”

“How do you figure that?” her father asked.

“Because the Declaration of Independence was signed in 1776,” Jacqueline answered.

“That is not right,” Joseph said. Joseph, an immigrant from Luxembourg, knew his American history. “The Declaration of Independence was just that – a declaration of an intention. Nothing happened in 1776 to create a country. The United States was born the day it elected its first president, George Washington, in 1789.”

Jacqueline was unconvinced, but later that year Joseph’s arithmetic led him to conclude that the United States would celebrate its 150th birthday in 1939, five years hence, just enough time to plan Joseph Shadgen’s big idea: A New York World’s Fair.

The 1939 World’s Fair, remembered, if at all, for its iconic trylon and perisphere, drew 45 million people to its Flushing Meadows site in 1939 and 1940. When it was conceived in 1934, its theme was The World of Tomorrow, but by the time it opened, World War 2 had already begun. Thus the title of James Mauro’s excellent new book on the Fair is Twilight at the World of Tomorrow.

Joseph Shadgen’s big idea was taken over by New York’s banking and political movers and shakers, and especially by a larger-than-life promoter named Grover Whalen. The World’s Fair turns out to be a metaphor for life in the United States in the 1930s, and all the headline-makers are on hand: Albert Einstein, Charles Lindbergh, Franklin Roosevelt, Fiorello La Guardia, Superman, Batman, and even Mickey Rooney and Judy Garland.

Pavilions showcased the visions of tomorrow as promised by GE, GM (“Futurama”), DuPont, Con Edison, RCA (television) and other industrial giants. Country pavilions included some, like Czechoslovakia and Poland, whose homelands were swallowed up while the Fair was in progress. Noteworthy factoid: When Grover Whalen’s initial sales campaign was sputtering, the two countries that gave him his breakthrough sales were the Soviet Union and Mussolini’s Italy!

Another nugget: The Flushing Meadows site chosen for the Fair was a huge ash heap known as the Corona Dumps, and its proximity to the more posh neighborhoods on Long Island led F. Scott Fitzgerald to call his new novel Among the Ash Heaps and Millionaires until an editor persuaded him to change the title to The Great Gatsby.

The book is well written, meticulously researched, and fascinating to read, especially if you are old enough to remember flying into LaGuardia and seeing the skeleton of the old perisphere, stripped of its gypsum, decades after all the other traces of the World’s Fair had disappeared, looking eerily like the Statue of Liberty in the last scene of Planet of the Apes.

When President Obama returns to his office from Maine, he will sign an 800-page financial reform bill, which will be proclaimed (by him) as the most far-reaching and beneficial financial legislation in at least 50 years. You have to give the man credit. He has tackled some of the most pressing issues of our times, boldly and full of self-confidence, without much help from the Republicans. They are his bills.

But 800 pages is a lot to read – bigger by far than Gone With the Wind – so we have to assume that the President hasn’t read it, but has left that to staff, and therein lies the rub. It would be nice to believe that the economic gurus have vetted the document and were satisfied that at least it would do no harm. But, grading the bill for the Wall Street Journal, Henry Paulson says “there are too many unknowns as to how the regulations will be applied.” Harvey Pitt, an accounting heavyweight and a former SEC chief, grades it an F. Pimco’s Bill Gross, who manages more money than almost anyone, gives the bill a D+. Nouriel Roubini, an economics superstar these days, gives it a C+. A few are more generous, but among experts who may be assumed to have read all or most the bill, the reviews are poor. If it were a Broadway play, the closing notices would have been posted.

Okay, so whom did the President rely on to go through the 800 pages, subparagraph by subparagraph? Let me guess. Not Rahm Emmanuel, certainly. And probably not Tim Geithner, whose plate is full. How about Barney Frank and Chris Dodd, or rather their staffs? Frank and Dodd are hard workers, and we assume their staffs work even harder. It’s a political deal, after all, sewed up (barely) with the help of Scott Brown and the two senators from Maine (now we know why Obama flew to Bar Harbor rather than the Gulf Coast for a quick vacation). Let’s acknowledge that the President knows how to pull the right political levers. But does that guarantee that the legislation is sound? No.

To begin with, who told the President about the possible unintended consequences of this bill? Who laid out a scenario under which the legislation would not prevent another financial collapse but would in fact precipitate one? President George W. Bush relied on the neocons surrounding him to draw up a plan to invade Iraq. The case for invasion was a “slam dunk,” they said, but where was the voice telling him all the things that might go wrong – no WMD, Abu Ghraib, Gitmo, civil war – and the far-reaching consequences. (One assumes that Colin Powell was such a voice, before he was sacked.)

The finreg bill is not as bloody as Iraq, but Afghanistan is getting there, and one can see a coming collision between the President’s deep desire to pull out and the militarists’ demands for victory. Whichever way he leans, there will be unintended consequences, and they won’t be pretty.

Nor will the unintended consequences of financial regulation. The hordes of new committees and their lawyers and a tidal wave of new regulations could strangle the economy just when the first faint flickers of a recovery are on the horizon. I hope that President Obama has put his new bill through a stress test, but I doubt it.
Posted by Fred Van Veen at 7:59 PM

From a story in today’s New York Times on the antenna problems experienced by some users of Apple’s new iPhone 4:

“Senator Charles E. Schumer, Democrat of New York, wrote an open letter to Mr. Jobs on Thursday demanding that Apple give customers a ‘permanent fix’ for the problem at no cost.”

Chuck Schumer’s power knows no bounds. Private companies, sovereign countries, all are under his thumb. He doesn’t ask; he demands. His latest domain is the business and technology of telecommunications technology.

“Senator Charles E. Schumer of New York, commenting on the quality of Raisin Bran, demanded that Kellogg’s increase the number of raisins in each package of the cereal at no cost to the customer.”

“Senator Charles E. Schumer of New York, charging that some orange juice cartons labeled “Lots of Pulp” did not in fact contain lots of pulp, demanded that a Government commission be established to set pulp standards for orange juice.”

“Senator Charles E. Schumer of New York demanded that polling organizations revise their data to reflect what he maintained was the American public’s overwhelmingly positive opinion of the U.S. Congress.”
Posted by Fred Van Veen at 10:12 AM