Those were the last words I heard from my wife on the subject of Barack Obama. They were not the words of a woman who was politically naïve. They did not derive from the distance between his eyes, much less the color of his skin. They were the words of a serious student of the political process, a woman who kept a copy of the Constitution by her side for ready access.

She had made the point before. As she saw it, he was a masterful actor, playing the part of a centrist, because it was the only way he could be elected President. But she heard enough tip-offs to convince her it was all an act. Being much less politically savvy than Jill, I was willing to give him the benefit of the doubt. And I was bowled over by his oratorical skill, which, I thought, would enable him to lead a divided nation. Jill, on the other hand, held that once he was in the White House, we would see the real Obama. She was, as usual, right as rain.

Barack Obama’s historic victory convinced him and his team that the country had declared itself ready for a leftward swing. It was a watershed event, he reasoned, signaling that people were fed up with the excesses of capitalism and ready to yield more control to Washington. But the election was not about that at all. Barack Obama won because he was not George W. Bush. And George W. Bush wound up a pariah, not because he was a capitalist, but because he allowed himself to be maneuvered into invading Iraq, and all the terrible baggage that came with it. The people who orchestrated the election of Barack Obama were the neocons behind the WMD fiction. Without them (and a pliable President), the White House and Congress would still be in Republican hands, because we are still a center-right nation. Nice going, Dick Cheney.

Now it is the evening of President Obama’s great victory on health care. No one is talking much about the centrist President now, about the great healer who will unite a fractured country. The atmosphere is poisonous tonight, and people are angry. The President may well feel that by November the acrimony will be forgotten. He may be right, especially if the economy improves. But if it doesn’t, he will confront a Republican Congress with one thing on its mind: payback.

One thing is sure: Jill saw right through Obama the Great Centrist, Obama the Great Orator. He fooled a lot of people, including me, but he couldn’t fool Jill.
Posted by Fred Van Veen at 8:50 PM 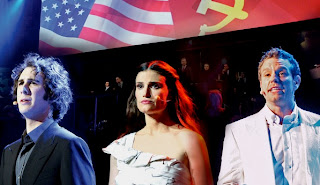 One night in early 1986 I found myself in London’s West End, looking for good theater. A marquee announced a musical called Chess, and I, a musical theater fan and a chess player, was hooked. A review posted in the ticket lobby gushed that one of the show’s songs, “I Know Him So Well,” was one of the finest book songs the reviewer had ever heard. That reeled me in.

The show was – I strain to be kind here – passable. The setting was a world chess championship, the protagonists the current title holder, an obnoxious American, and the challenger, a Russian. You have to bear in mind (1) that the Cold War was in full flower in the 80s and (2) that the memory of the famous championship match between Boris Spassky and Bobby Fischer was still fresh. The political overtones heightened the drama of that match (which Fischer won) and cried out for a theatrical treatment.

Tim Rice, who had collaborated with Andrew Lloyd-Webber to give the world Evita, tried to talk the composer into a project based on a chess championship match between an American and a Russian, but Lloyd-Webber was deep into other projects at the time, and passed. Rice then (in 1981) joined with half of the (then dissolving) Abba team, Benny Andersson and Bjorn Ulvaeus, and a musical called Chess started taking shape.

The problem, as I remember it, was a clumsy book and an inadequate score. (“Aside from that, Mrs. Lincoln….”) The staging was another minus. The stage was dominated by a large chessboard, tilted at an angle, which managed to upstage the actors. Only two songs were memorable: “One Night in Bangkok” and “I Know Him So Well.” Rice should have waited until Lloyd-Webber’s calendar was free.

The show ran in London for three years, but was still a financial and critical failure. Still, the basic idea was good, and Rice sat down to rewrite in preparation for taking Chess to Broadway. One good song (“Someone Else’s Story”) was added, and the character of the American was softened. The massively rewritten Chess opened in New York in April 1988 – and died 68 performances later, losing millions.

So why am I telling you about such an all-out floperoo? Because it has resurfaced again, this time as a so-called concert version, staged at London’s Royal Albert Hall and available to Americans on DVD. And it is very, very good.

First, don’t let the words “concert version” fool you. This is a huge production, with a philharmonic orchestra, a large chorus, dancers, and rear projections to suggest Italy (Act 1) and Thailand (Act 2). The cast is topnotch, notably Josh Groban as the Russian and Adam Pascal as the American. The music has been greatly improved over the years, or maybe the original was better than it sounded; that orchestra and chorus may have made the difference.

Rice hasn’t forgotten the touches that made Evita so riveting. Who can forget the tableau of the Buenos Aires upper class, gliding en masse from one side of the stage to the other while denouncing Peron’s mistress? In Chess, a group of “old boys” at the British embassy cluck their displeasure at all the asylum-seekers cluttering up their offices. And a character called “The Arbiter” serves much the same purpose as does Che in Evita.

Some plotting weaknesses still show, especially in Act 2, and the song “Someone Else’s Story” is inexplicably given to the Russian’s wife rather than to his girlfriend. But these flaws are outweighed by the effect of what is, over-all, a dazzling production.

Rice is rumored to be planning another go at Broadway, but a Chess on the scale of the Royal Albert concert would be financially impossible in New York. My suggestion is to grab the DVD, because Chess will never be this good again.
Posted by Fred Van Veen at 11:06 PM