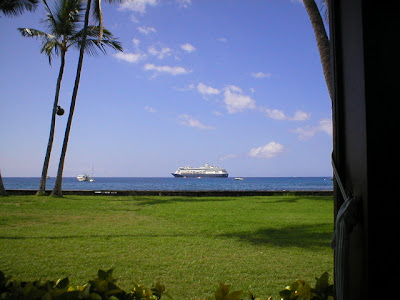 Since we were last together, your beachcomber has traveled about 10,000 miles. No dummy he, the destination was the lower, warmer latitudes – to be specific, the islands of Hawaii, via a cruise ship. The climate was, well, Hawaiian, and it was the cruelest of all shocks to find the temperature at 8 degrees when we returned home. Maine has no mercy for those who desert her when the going gets rough.

If you’ve experienced ocean cruising, you know that it’s not exactly hazardous duty. But someone’s got to do it, so we dutifully boarded the good ship Zaandam at San Diego for 15 days of crossing to Hawaii, puttering around a few islands, and crossing back to San Diego. We’ve taken enough cruises to be a bit jaded about the food, entertainment, etc., but I refuse to join the chorus of complainers you find on most ships these days. They are enjoying a life style that would have been incomprehensible for most of them in their youth, a degree of pampering that 98 percent of the world’s population cannot hope to enjoy, ever, and yet they complain. Not this fellow, who knows how lucky he is.

The Zaandam is a good-sized ship: 63,000 tons, 1375 passengers, but it is hardly a megaship. In fact, when we docked at San Diego, the Zaandam was dwarfed by the Oosterdam, preparing for a trip down the Mexican Riviera. The Zaandam was built in 2000, and the ambience is quiet, the clientele sedate. It is definitely not a party ship. After dinner and the show, we tended to cap the evening in the mellow Explorers’ Lounge, listening to the classical music of a very good string trio.

The itinerary included Hilo, Kona, two days in Honolulu, and a day in Maui. The first day out, huge rollers from the northwest caused the ship to roll, forcing a cancellation of the big production show and keeping many (including yours truly) from dinner. After that, it was relatively smooth sailing.

The Pacific is one big drink of water – bigger, we were told, than the earth’s entire land mass. And it is deep – over 18,000 feet deep on our route. The ocean is so vast that in the four-day sail westward, we saw only one (container) ship. Coming back, it was again a single ship.

The food was standard cruise fare, which is to say very good indeed, and the entertainment was as good as any we’ve ever seen on a cruise. The dancers were Broadway quality, and the sets and costumes were just this side of unbelievable. Among solo performers, the best by far was an Australian cabaret singer named Annie Frances. If there is any justice in Showbizland, she should become a big international star.

The only drawback to winter cruising, for us, is that we have to fly some distance to catch the ship. The exceptional legroom, on-time performance, and Company whimsy of JetBlue all help, but flying is still a penance, and those passengers who live near the major cruise ports are very lucky.

Oh yes, the ship offered daily trivia games, which attracted throngs of people anxious to prove how smart they are. I can’t resist that bait, so Jill and I were regulars, joining the same teammates every day, and winning not a single game. That’s because Holland-America cheats. When the quizmaster asked which movie actor tough guy was also a talented dancer, we answered George Raft, but Holland-America would accept only James Cagney. Well, of course Jimmy Cagney danced; everyone knew that. But Raft was a real dancer before he was a Hollywood gangster.

But I said I will not complain, so I will overlook the Zaandam’s woefully misinformed trivia personnel and say that it was, over-all, another wonderful cruise experience.