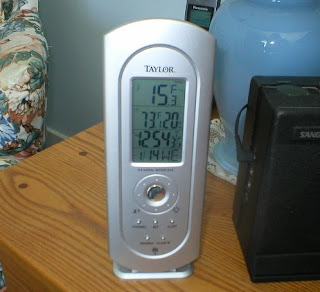 Sitting on my night table is a remote digital thermometer, which receives signals from an outside sensor and converts them into temperature readings so that each morning when I wake up I can see what I am store for (this time of year in Maine, the news is usually bad). As far as I can tell, it is accurate, and the digits are big enough so that I don’t need my glasses, so I am generally a happy customer. But the thermometer also includes an alarm function, so that every day at noon it chimes for two minutes. Or, to quote my wife, “it goes ding-ding. Fred, it is going ding-ding. Why is it going ding-ding?”

I have read every word of the instruction sheet, and I have concluded that there is no way to turn off the ding-ding. It is a software bug. Either that or Taylor Instrument has forgotten to tell users how to shut the damn thing up.

If this were an isolated instance of digital mischief, I could understand. But I am afraid it is worse than that. All the digital devices in the house have mounted a mutiny, which has grown worse since the protracted power outage caused by an ice storm a few weeks ago. The microwave oven goes berserk almost every day. One minute it works fine, the next minute it quits, and no amount of poking the controls will produce any response. Then, an hour or two later, it comes back to life. Unplugging it, as the manual suggests, doesn’t cure the problem. Nor does the addition of a surge protector. It works when it jolly well feels like working.

A digital picture frame also has a mind of its own, firing up at odd times without human intervention. A possible explanation, according to the manufacturer’s on-line service technician, is that it speaks PC, and I speak Mac when I load pictures from iPhoto. Then there is my wife’s computer-controlled sewing machine, which, after years of faithful service, decided that buttonholing was something it just didn’t want to do any more.

My wife talked darkly of mischievous “little men” inside these digital devices. I used to laugh at this; now I am not so sure.

Next month, we are all forewarned, analog television signals will go the way of 45-rpm records, and a new day of digital bliss will dawn. Digital signals, the FCC and the consumer electronics industry tell us, will give us better picture quality and open up lots of ancillary services. (Most of all, they don’t tell us, they will resuscitate sagging sales at Best Buy and Radio Shack.)

The other day I played an old tape cassette on a good tape deck into a very good analog amplifier, which fed a pair of very good old speakers. It was a tape of Melissa Manchester singing old classics, starting with “Over The Rainbow.” And I heard sound I have never heard from my CD collection or my iHome player or any of the digital wonders that bedeck my entertainment center. The timber, the bass, the color were beyond anything the digital equipment could emulate. It was beautiful.

I will go along with the digital revolution, because I have to. Analog computers lost the battle a long time ago, and if we want all the benefits of the computer age we must be willing to put up with the occasional mutiny and the ding-dings. But I will keep my old analog gear, my old tape cassettes, and my old original cast albums on LP records, so that every so often I can listen to full-bodied music and not just digital slices.
Posted by Fred Van Veen at 1:43 PM