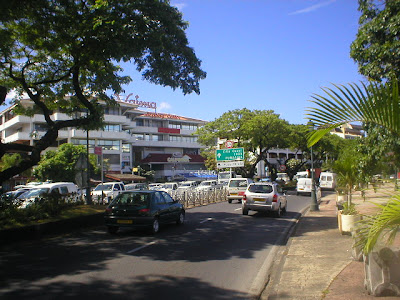 If you asked the passengers on the Rotterdam which was the most beautiful island they visited on the cruise, most would probably choose Moorea. The island is beautiful, to say the least, so beautiful that it was chosen to stand in for Bali H’ai in the film South Pacific and was used in the filming of several other movies. It has a mountainous coastline which is easily seen from Papeete, the chief city in Tahiti. Papeete is ,for that matter, the metropolis of French Polynesia.

I had been to Moorea, Bora Bora, and Tahiti before, and I had taken “grand tours” on all three islands, so my curiosity was easily satisfied by short walks around the ports. A fourth island, Raiatea, was easy to navigate because the ship docked right “downtown,” as it did it Tahiti. 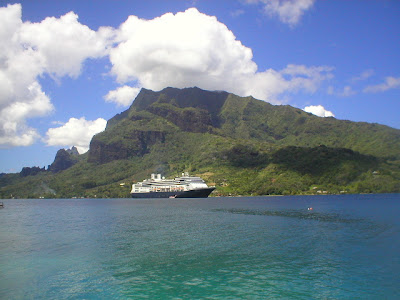 I had remembered the islands as conspicuously successful, with resorts (like the Club Med at Bora Bora) doing a thriving business. Alas, the recession has reached Polynesia, and a number of resorts have closed their doors. Tourism is the economic driver for these islands, and when it's weak, Polynesia suffers..

The top photo shows the bustling streets of Papeete, the middle one shows the Rotterdam anchored at Moorea, and the bottom one shows a church at Bora Bora. The traffic in Papeete is heavy, but if a pedestrian makes just the slightest move to cross the street, it all comes to a dead stop. Either the drivers are impressively polite or the gendarmes are very strict. 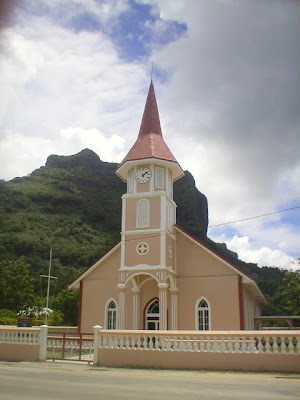 In Papeete, a native lady was selling tours at dockside. Struck by her charms, I complimented her. “Polynesian women must be the most beautiful women in the world,” I said. It was hardly an original thought, but she thanked me sweetly, and then, pointing to her garland of flowers, added this:

“My flowers are not real. But I am real.”

Gauguin would have appreciated that.
Posted by Fred Van Veen at 2:18 PM