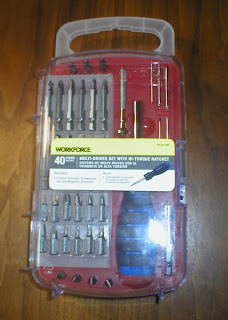 The public's resentment about China is palpable, especially in the heat of a presidential campaign. Candidate Romney promises that his first act upon becoming president will be to brand China a currency manipulator, setting in motion a list of retaliatory measures. President Obama attacks an opponent who, he says, favors outsourcing jobs to China. The race, it seems hinges on who can sound more hawkish on China and Iran. The hawks never ask what happens if relations with China escalate to the point where armed conflict is triggered. The lesson of Vietnam and Iraq and Afghanistan is forgotten: It is easy to start a war, tough to end one.

The China question is thrown into focus by products like the one pictured here. It is a 40-piece screw-driver set with a high-torque ratchet. The plastic cover opens to reveal an impressive array of tools, all nicely organized in a neat, rugged carrying and storage case. And of course, it was made in China.

The set, marketed under the trade name Workforce and offered by Home Depot, sells for $10.

Multiply that by the thousands of products made in China and South Korea and Thailand and Vietnam and sold in the United States, and the bottom line is hundreds of millions, if not billions of dollars of savings for American consumers. Politicians complain about the American jobs lost, but they rarely acknowledge the other side of the ledger.

What's more, many American companies, especially in high tech, depend on overseas markets for 40 or 50 percent of their sales. Is it realistic to expect these companies not to staff their foreign sales and service centers accordingly? At General Motors, the fastest-growing market these days is China. Does anyone complain that GM is exporting sales and service jobs to China?

So, the next time you hear a politician thunder about "getting tough" with China, ask yourself what the consequences of getting tough will be. If someone seriously suggests risking a trade war, let him or her prepare the American public for soaring prices on a long list of manufactured products - and for a long list of unintended consequences. Our relations with China are not perfect, but they are pretty good - for the moment.
Posted by Fred Van Veen at 10:45 AM